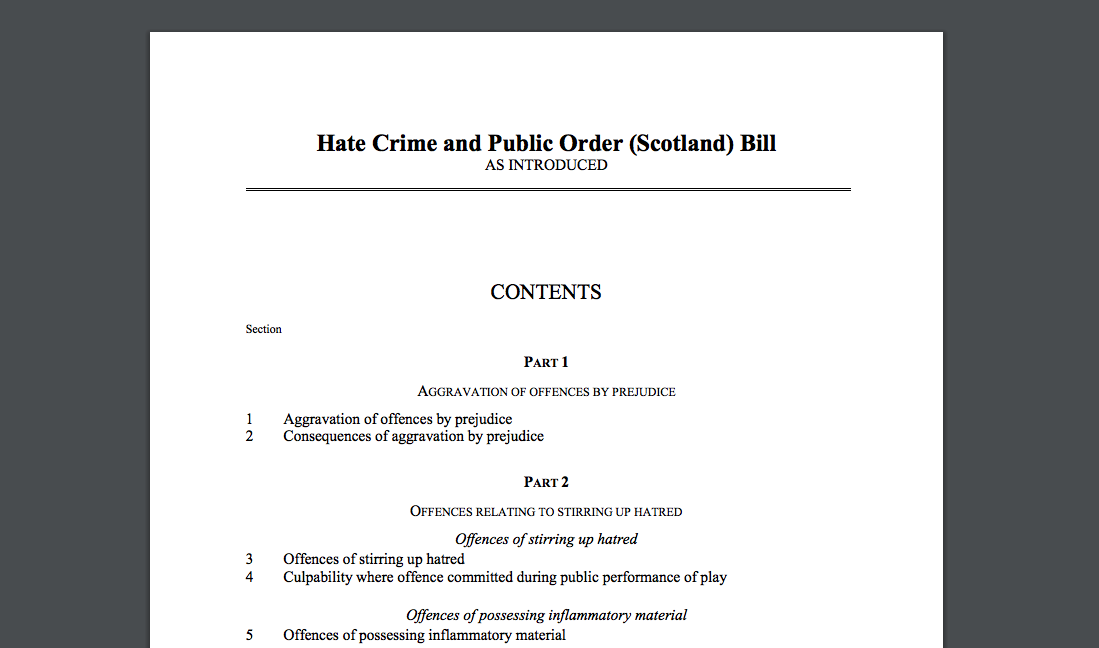 This morning, the Scottish Parliament’s Justice Committee concluded Stage 2 scrutiny of the bill which includes controversial new stirring up hatred offences punishable by up to seven years in prison. The offences have been criticised by a wide range of groups including the National Secular Society, the Catholic Church and the Scottish Police Federation for posing a threat to freedom of expression.

Although several amendments to the bill were agreed this morning, amendments to provide greater protection for free speech were withdrawn. The Scottish Government and opposition front benches are discussing the shape of new protections behind closed doors and intend to lodge an amendment before a final, Stage 3 debate in a few weeks’ time.

Spokesman for the Free to Disagree campaign Jamie Gillies commented:

“It’s highly concerning that the shape of free speech provisions in the Hate Crime Bill – perhaps the most controversial piece of Holyrood legislation in recent years – is still being decided weeks before a final vote and behind closed doors. Given the concern over the bill, strong free speech clauses should already have been agreed to by all parties.

“MSPs can’t afford to get this bill wrong. Doing so could erode precious democratic freedoms and see the parliament returning to the legislation years down the line. It would be prudent for MSPs to defer scrutiny of the stirring up hatred offences until after the May election. New proposals could be brought forward and discussed over time, with renewed input from a wide range of stakeholders.”

A joint letter signed by the Free to Disagree campaign, Index on Censorship, the Society of Editors and others was sent to MSPs last week urging a halt on the plans. The full text of the letter is included below.

We the undersigned have serious concerns about Part 2 of the Scottish Government’s Hate Crime and Public Order Bill, and increasingly so in light of recent parliamentary deliberations.

Over the last year, there has been a robust debate about Part 2 of the bill, which outlines new offences on the stirring up of hatred. We all condemn crimes motivated by hatred and prejudice. The difficulty with this Bill, in its current form, is its potential to have a wider, negative effect on freedom of expression in Scotland.

When the bill was published last year, the police, the legal profession, academics, civil liberties groups and others cautioned that the offences could catch legitimate debate on a range of issues. The vague wording of the offences and a lack of adequate free speech protections could, they warned, place a chill on free expression in the arts, the media and the public square when it comes to discussions about contentious issues such as religion and trans rights.

After a wide and sustained backlash, the Scottish Government announced several concessions. Most significantly, Ministers conceded that offending should be limited to ‘intent’. It also committed to ‘broadening and deepening’ a free speech clause covering religion and inserting a new clause on transgender identity.

Cabinet Secretary for Justice Humza Yousaf lodged amendments to effect these changes ahead of Stage 2 deliberations by the Justice Committee, which began on 2 February 2021. However, the Cabinet Secretary, in agreement with other MSPs on the Committee, decided to withdraw amendments on freedom of expression at the eleventh hour, saying he would seek ‘consensus’ on a ‘catch-all’ free speech clause, to be drafted ahead of Stage 3.

This move has, in our view, undermined the whole process of scrutiny to date. Amendments to safeguard freedom of expression on religion, sexual orientation and transgender identity – topics that are subject to strong and often controversial debate – were vitally important and agreed upon by the majority of stakeholders who have engaged with parliament over the last 12 months.

Providing separate and robust freedom of expression provisions on these topics was also the approach advocated by Lord Bracadale QC in evidence to the Committee last year. He said: “Such amendments to the bill would be an expression of the kind of line that we want to identify between ‘offensive behaviour’ on one side and ‘threatening and abusive behaviour’ on the other”.

The idea that a workable ‘catch-all’ provision covering these topics, as well as the characteristics of age, disability, and variations of sex characteristics, can be agreed upon by the government and other parties before final, Stage 3 proceedings take place is, frankly, untenable. Manufacturing such a clause over the next few weeks, behind closed doors, will also necessarily preclude the views of parliament, stakeholders and the public from being taken into account.

We strongly believe that producing workable provisions on the stirring up of hatred in this parliament is now entirely impracticable. These provisions could impact upon the most precious liberties in any democratic society: freedom of speech, freedom of expression, freedom of conscience and religion. They must be handled with the utmost care.

We urge MSPs in every party to oppose Part 2 of the Hate Crime Bill and allow other, non-contentious aspects of the bill to proceed without it. New proposals on the stirring up of hatred could be brought forward in the next parliament, where they would be scrutinised thoroughly over time, with renewed input by a wide range of stakeholders.