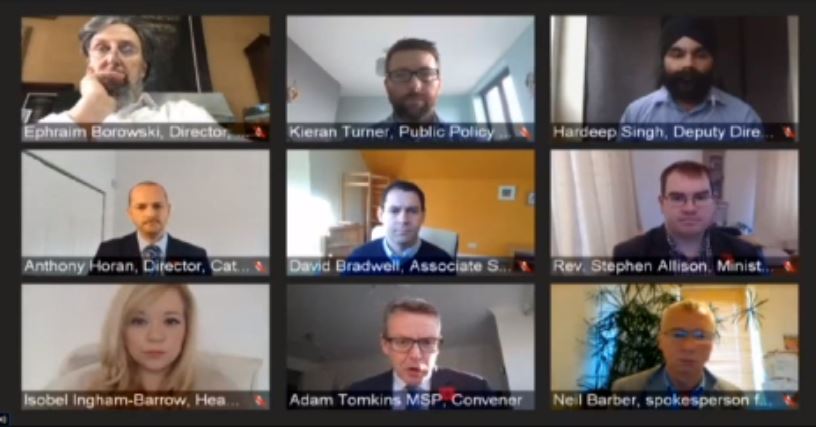 Scrutiny of the Hate Crime Bill continued this morning as representatives of the media, creative industries and religious groups appeared before MSPs on Holyrood’s Justice Committee.

Journalists and creatives expressed concern about a chill being placed on their work and the prospect of columnists, writers and others being drawn into the criminal justice system – even when conduct would never meet the threshold for an offence.

John Mclellan, Director of the Scottish Newspaper Society, cautioned that the process of police investigation could be “widened” by the new ‘stirring up hatred’ offences:

“You would have editors and journalists interviewed under caution if a complaint had been made because the police would be honour bound to investigate… When a new provision is brought in the police are automatically under pressure to show that the legislation has been worth it.”

Mr McLellan warned that “people would be put through the mill to prove that they have nothing to answer for”, and have their lives “put on hold” whilst a criminal investigation is played out, resulting in great stress for those involved.

He added: “It would be a brave person who would risk going to jail for seven years for something they had written. The problem here is that they couldn’t necessarily know that they are committing an offence.”

“Even if you accepted that there is a chilling factor and sought to do everything you could to abide by the law there’s no guarantee that a complaint wouldn’t be lodged.”

Anthony Horan,  Director of the Catholic Parliamentary Office, called for the free speech provisions in the bill to be ‘broadened and deepened’ to allow expressions of “antipathy, dislike, ridicule and insult”. He added that vague terms in the bill such as ‘abusive’ and ‘inflammatory’ need more definition, saying: “What arouses anger or hostility in each individual is very subjective”.

Kieran Turner, of the Evangelical Alliance, echoed his concerns saying “absolute clarity” is needed on what the bill is trying to catch. He called for a message on the face of the bill that we as a society “want to protect the principle of freedom of expression”.

Rev. Stephen Allison of Free Church of Scotland said whilst he welcomes a move to intent, it doesn’t allay concerns completely. Quoting the Scottish courts’ Jury Manual, he said: “Intention is a state of mind, to be inferred or deduced from what’s been proved to have been said or done”, adding “you can’t look into someone’s mind”.

Neil Barber, spokesman for the National Secular Society, said the change on ‘intent’, whilst necessary, will be “no comfort whatsoever to the artist or the playwright who is facing a lengthy police investigation and a court case”. Mr Barber said the bill is going to “intimidate free speech right from the start” because it fails to “distinguish between ideas and individuals”.

And Hardeep Singh, of the Network of Sikh Organisations (NSO), said definitions used in the bill, including the terms ‘abusive’, ‘hatred’, ‘insulting’, and ‘inflammatory’ are “vague and nebulous”. He warned that the bill as drafted would “leave it for the state and courts to decide which opinions we can and cannot have”, presenting a “real danger that merely offensive speech could be caught”.

Unfair singling out of theatre

He argued that a provision in the bill on public performances of a play should be “struck out”, questioning why theatre had been singled out over and above other art forms.

The added that the nature of theatre, since the days of ancient Greece, is people “putting points of view across on stage which we might disagree with passionately” and “breaking of boundaries”.

Lisa Clark, Project Manager at Scottish PEN, echoed his concern, saying there was no need for the specific provision on plays, which could result in a “chill” being placed on artists’ work.

“Today’s session further underlined the need for additional amendments to the Hate Crime Bill. Journalists and creatives are still concerned about a chill being placed on their work and the prospect of columnists, writers and others being drawn into the criminal justice system – even when conduct would never meet the threshold for an offence.

“Religious groups again emphasised the need for stronger free speech protections. And theatre representatives criticised the singling out of plays. The change on ‘intent’ announced recently was welcomed by all but it is by no means considered a ‘magic bullet’.

“Many of the concerns critics have relate to the subjective language of the bill. What will the terms ‘abusive’, ‘hatred’ and ‘inflammatory’ be taken to mean? And what might the scope of new offences be? Much more clarity is required.

“It is perfectly possible to enshrine strong protections for victims whilst also ensuring freedom of speech and expression. With careful deliberation and more key amendments, the bill can achieve this.”